When deciding to invest, a key question an investment fledgling must ask oneself is: “What type of investor do I want to be?”, or “What kind of investment strategy should I adopt?” The answer is an important consideration in starting your journey into growing your wealth!

Will you be the investor that favours action? That is:

If your answer to all these questions is yes, then you are an “active investor”.

Perhaps, you are an investor that favours patience? That is:

If this sounds more like the approach you would take, then you are a “passive investor”.
Maybe you’re in between. Can you be both?

[1] A market index seeks to track the performance of a group of assets by country or region, sector, or a certain strategy. Market indices exist for many asset classes (stocks, bonds, commodities) and are often used as a  benchmark for portfolio performance.
Let’s start by learning about active investors:

At first glance adopting this sort of strategy seems like the obvious choice. I mean, ‘beating the market’ sounds nice right? It can also be exciting to research and pick assets that you like.

Active investing is a highly involved process where investors try to exploit profitable conditions to generate as much return as possible. Continuous analysis of the assets that make up an active investor’s portfolio is carried out, and regular trades are made to orient and re-orient the portfolio in a favourable way to outperform major indices and generate what is called ‘active return’.

Active return, commonly called alpha, is simply return in excess of a portfolio’s benchmark. So, if you benchmark your portfolio against the S&P 500 which, hypothetically returned 10% for the year and your portfolio returned a stellar 20%, you’ve beaten or outperformed the market, generating alpha of 10%. Of course, there are situations where investors underperform the market, or perform on-par with it as well.

Let’s look at a fictitious example of an active investor, Active Alice:

As a novice investor, Active Alice reaches out to her Financial Advisor for information and analysis on several companies she either likes or knows about. Based on the research and advice from her advisor, she strongly believes that five (5) of the companies will perform strongly in the coming year. Active Alice then creates a portfolio consisting of these five (5) stocks in equal weights, and uses a broad market index that comprises five hundred (500) stocks in equal weights to gauge her performance.

Alice’s picks perform well, collectively returning 20% for the year. In contrast, the benchmark index returned 10%, which means that Alice beat the benchmark by a whopping 10%. Way to go Alice!

If in the following year, four of Active Alice’s stocks perform well, but one of the companies which Alice holds the stock of encounters difficulties, leading to a decline in its price of -50%. This will cause her overall portfolio return to be -5%, while the benchmark will return 5%, underperforming the index by -10%.

This shows that active investing can also be a double-edged sword. While Active Alice would have benefitted from her choices in the first year, she underperformed the index and her portfolio declined in the second year. Furthermore, Alice’s portfolio was more sensitive to the movements in one stock than the index given her concentration on five (5) stocks, making her portfolio more volatile.

In order to conduct her trades to re-balance the portfolio, which she will do often as an active investor, Alice will incur trading costs. While costs for individual trades may be relatively low, a series of trades over time can detract from returns.

Moving on to passive investment:

As mentioned before, this strategy employs a ‘buy and hold’ approach, where an investor selects assets they expect will perform well over the long term. You can already tell that a passive investor would likely incur far less fees when compared to an active investor.

The most common passive investments are made in assets that seek to emulate or track the performance of a market index. It is notable that indices such as the S&P 500 cannot be purchased, and it is impractical to buy every asset comprising an index, as the costs would far outweigh the benefits.

However, individuals can approach their brokerage firms to seek out and buy into assets known as Index Funds and Exchange Traded Funds (ETFs). These ETFs are designed to track specific indices such as the S&P 500. Investing in these ETFs is quite hassle free, as they trade as any other single asset would over major exchanges. Index Funds and ETFs represent portfolios of assets, which means that a passive investor buying Index Funds or ETFs will benefit from inherent diversification from owning one of these.

Having just turned twenty-five (25), Peter wants to invest his money for retirement. He works twenty hours a day – yikes – and therefore has no time conduct research, let alone sleep, like Active Alice did. Instead, Passive Peter consults his financial advisor and his broker, and then decides to invest in an ETF that tracks the S&P 500.

Now, Passive Peter has purchased one asset, however this one asset represents exposure to five hundred different stocks. Peter can expect that his asset will provide returns that are similar to the performance of the S&P 500. It is notable that these funds typically have annual fees used for their upkeep. Nothing is free, unfortunately. However, fees on these types of investments are generally very low.

Passive Peter would be subject to all movements of the market. Unfortunately for him, that even includes the declines.

So, how do Active Alice and Passive Peter’s investment strategies stack up? Well, Alice knocked it out of the park in the first year, earning 20% compared to Peter who earned a mere 10%, but, how the tables turned in year two, where one weak position, led to a loss of -5% for Alice despite the market, and Peter earning a positive return of 5%.

Both investors generated commendable returns over the two-year period, however Passive Peter’s returns were more stable, as you would expect given Alice only owns 5 shares whereas Peter indirectly holds 500!

Now, I know you’re aching to know: Which strategy is better?
Unfortunately, there’s no clear-cut answer. Historically, passive investment has been favoured given the risks and costs involved with active investing. In most years, the broad market has performed positively as can be seen by the chart below which shows the movement of the S&P 500 from 1985 to 2020. 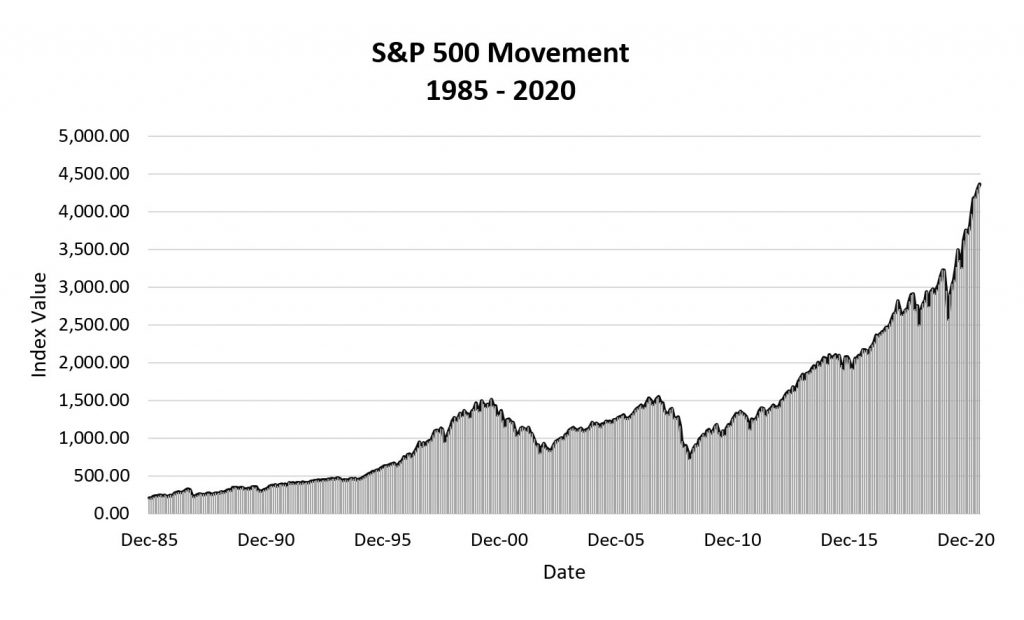 The dips in the market for certain periods such as the 2008/2009 financial crisis are evident. However, if the market moves in a similar manner to how it moved over the last thirty- five (35) years over the next thirty-five (35) years, Passive Peter might be quite content with the result at retirement.

Active Alice, on the other hand would be even better off if all her choices are perfect and she manages to outperform in every year. However, such a perfect outcome is nigh-improbable, as there would definitely be periods where Alice would underperform the market. If she experiences continued significant underperformance of the market, Alice’s goals for her investments may be set-back, and she may even be prompted to change her strategy.

At some point, Alice’s lifestyle may change and active investment with its risks and costs, might not be as attractive to her anymore. The same may go for Passive Peter, who, through his insane hours of work has earned many promotions and now works for one hour a day and can spend a lot more time researching and following the market. He may now view an active strategy more favorably. The good thing is that your investment strategy is not a black and white lifelong decision. You can choose to be an active or a passive investor or to employ a mixture of both strategies by investing in ETFs and individual securities. You can also adopt the same strategy throughout your life or change things up over time.

A careful look at your current circumstances in life, financial obligations and level of risk must be taken, and a financial advisor should be consulted in order to help you determine which style is best for you.
After all that careful consideration, you can decide whose investment strategy you would prefer to adopt.

Active Alice’s? Or Passive Peter’s? or maybe one that is unique to you.
Happy Investing! 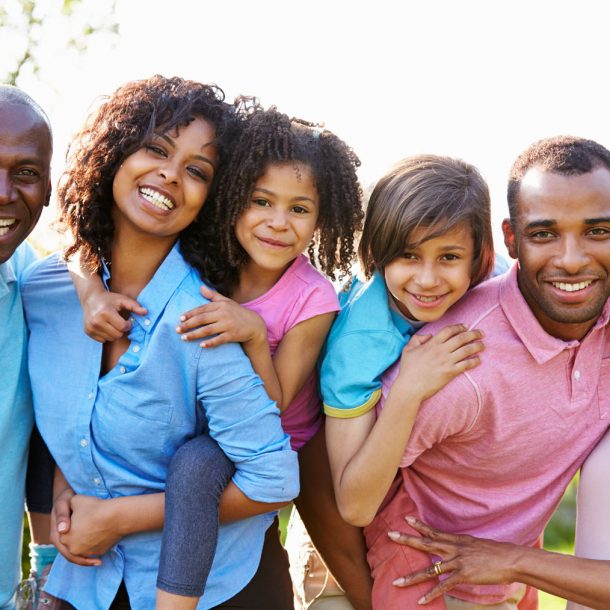 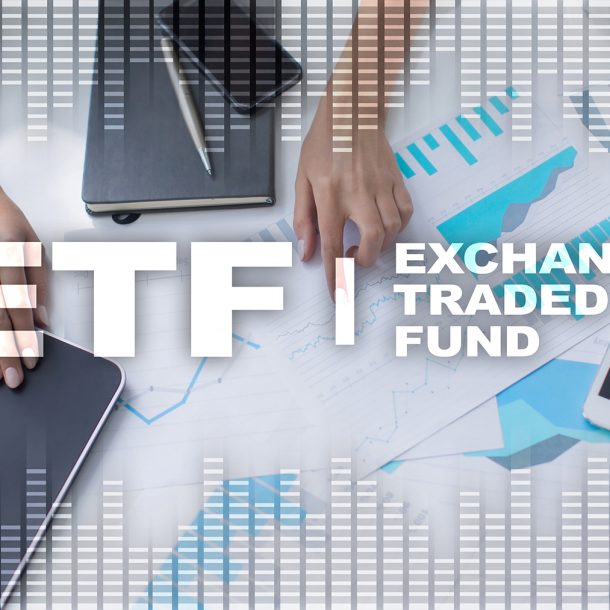 Obtaining the Best of Both Worlds
Next Article